Cuban Motion and Hula Dance…how are they similar? 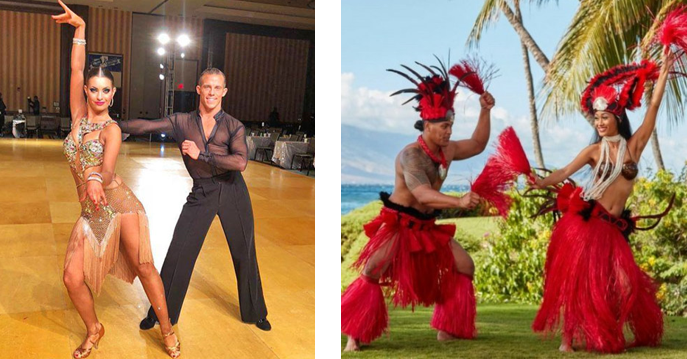 Hula dancing is a very unique style of dancing. According to Hawaiian culture, the Hula dance was considered a gift from the gods, yet it is unsure of the exact timeframe of when this dance originated. During the 1800s, differing styles of hula evolved and began blending not only native Hawaiian styles together, but also those of foreign countries; mainly Japanese elements. Hula is also vastly inspired by the elements they live by; from the ocean waves, to the wind in the trees.

“Just as the tree does not anticipate that the wind is coming and therefore lay down in preparation for its arrival, but responds to the touch of the wind.”

As far as Hula dancing is concerned, it is not much different from the Cuban motion we teach in rhythm dancing. Hula dancing, just like the rhythm dances, start with a preparation step.

“They observed how the ocean builds up energy, rolls to shore, seems to take a breath to build up energy and then returns to begin again.”

Another way that hula dancing and Cuban motion are similar is in the way they are executed. In most styles of dancing, the dancer must anticipate the beat and be there on the first count. However, in BOTH Hula and Cuban motion, there is a delayed reaction of weight transfer…meaning the hip is going to be about ½ count behind the actual foot placement. In doing this, you create a visual representation of what the music is evoking and visibly creating the musical rhythm from the arm styling to the hip action.

Though beats may be slightly different and the music varies from the various styles of dances whether it be rumba, Cha-Cha, or Hula…the technique behind these dances create a universal dance language that can be translated throughout many cultures.