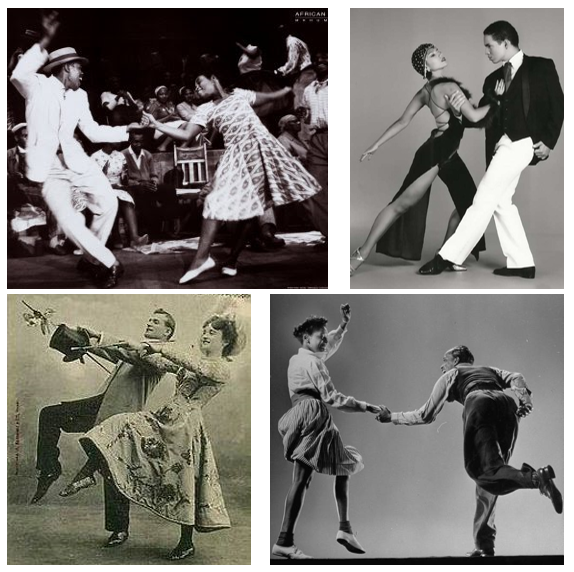 Social dancing has evolved so much throughout the ages. WE have so far travelled throughout the Renaissance and Baroque era where we discovered that dancing was a sign of social standing. We especially see a huge trend happening in the early 1900s with the birth of ragtime music in the United States!

Ragtime music was a new type of rhythm to the social dance scene. Inspired by the African American community, “this new Black American syncopated music demanded more freedom in dance, a reaction against the restricted dances of the past that appealed to the younger generation.” With this new music came new dances. Dances like the Foxtrot, and the Cake Walk were born, but THE DANCE to dance to ragtime music was the Rag. This dance also known as the One-Step, was basically walking or trotting around to the beat of the music. The type of holds for these dances were starting to become a lot less poised and, at the time, seen as scandalous. “…dancers would flap their arms, shake their shoulders, bob their heads, hop or slide or stomp their feet, or wiggle their backsides. The elegant, erect posture of previous couple dances” had to give way.

As we enter the 1920’s, American Jazz was starting to take over and create another style of dance, the Charleston! The Charleston took the world by storm as the rise of public dance places like Cabarets, nightclubs, and speakeasies. The 20s were a time of growing leisure and excitement, and dance was KING! Another dance that was making a comeback during this time was the Tango. The new post-war version, the French tango, was more standardized so it made the dance easier to learn. This time of excitement was to be short lived and overshadowed by the Great Depression and the rise of film musicals in the 1930s.

During the time of the 1930s, people used social dancing as a way to cope with the hard times of the Great Depression. Dance Marathons, or “Dance till you drop” sessions, were becoming a fun way for desperate couples to earn prize money. Another big sensation were the film musicals starring Fred Astaire and Ginger Rogers. These films were keeping spirits lifted and dance floors full. During the late 30’s and into the 40’s, Big Band music was coming into the limelight, and thus, the Swing was born! Such dances as the Jive, Jitterbug, and Lindy Hop were becoming vastly popular throughout the world as our American GI’s travelled and danced around the globe while protecting our freedoms. Latin rhythms were also becoming very popular in Europe. Dance such as the rumba and samba, made popular again by the beautifully famous Carmen Miranda, were officially recognized by the Official Board of Ballroom Dancing.

By the time we get to the 1960s on to the present, there are so many different styles of social dancing, its hard to name them all. From dances you can just do with your friends like the Hand Jive, the Swim, or the Watusi, to partnership dances such as the hustle for that disco fever and salsa for that spicy latin rhythm.

Dancing has been a part of us since the dawn of time. Whether times were tough or times were jovial, we have always found a reason to dance…and dancing is definitely much more fun when you are dancing with friends!