How these American born dances impacted the ballroom world! 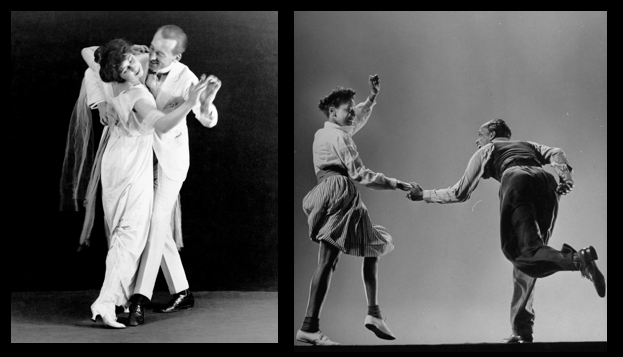 How these American born dances impacted the ballroom world!

Dance has always been a part of our culture. And with America being a melting pot of diversity, it’s no wonder that we can create something so unique that the rest of the world has no choice but to take notice. Two American born dances not only had everyone’s eyes on us, they took the ballroom world by storm and defined themselves into the standard basics we all get introduced to. Take a look at how the swing and the foxtrot turned into the social craze around the WORLD!

Swing Dancing: The dance that defined an era

Swing dancing originally started in Harlem in the 20’s during the jazz era. As it grew in popularity, so did the various styles; Lindy Hop, Balboa, jitterbug, and the Charleston. This is the dance that not only became a staple in our nation, it also broke many demographics during that time. People of all races danced together in harmony while listening to that “swinging beat” of the band. As it grew in popularity, so did the various styles. During WWII, our brave soldiers started dancing this popular swing dance while in Europe. That’s when the world of ballroom dance took hold of this AMAZING dance and created a whole new style called the Jive. Jive became a standard dance in the International competitive ballroom circuit shortly after the swing craze hit and has become a staple in Latin style!

Foxtrot was originated in the summer of 1914 by a special Vaudeville actor, Harry Fox. He used to incorporate his audience into his shows and “trot” around the auditoriums, which gave it the name “Fox’s Trot”This unique social dancing would soon continue to take the world by storm when it captured the eyes of some of the elite people of the dance world; among which were GK Anderson and Josephine Bradley. They took this American-born dance to London where they not only won many competitions, but officially sealed the standard for what foxtrot is today. Over time, just like the swing, as it grew in popularity, so did the various styles and speeds; American Foxtrot, Quickstep, and Slow Fox.

These two American dances reshaped the face of ballroom dancing. Swing and Foxtrot have become the ultimate social dances and a universal language for the world!