Shag: The Swing Dance of the South

By: admin|Published on: Jun 3, 2021|Categories: benefits to ballroom| 0 comments 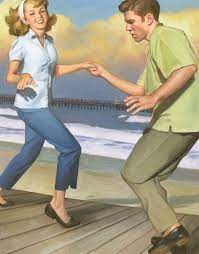 When you think of Charleston, you think of sweet tea, sunshine, sandy beaches, and…of course…good ole’ fashioned southern cuisine. How about South Carolina?… where the state bird is the Carolina Wren, the state flower is the Yellow Jessamine, and the state dance is the CAROLINA SHAG! There are roughly over 30 states that have an official state dance (most of which are square dancing), but shag is in a league of its own. Down South we call it the “Swing of the South” and it has been described as a “cold beer on a warm night with a hot date and no plans for tomorrow.” Let’s take a look at how shag became such a trend in the Carolinas.

The shag was born along the Atlantic coast, specifically from Ocean Avenue in North Myrtle Beach to Carolina Beach in North Carolina, and originated within the African American community in the 1930’s. With the popularity of smooth beach music and the R&B music genre arising in the 40s, the dance grew in popularity with a much broader audience. This very dance broke many racial barriers as it grew when certain individuals, such as Billy Jeffers and “Chicken” Hicks would head out to the Black night clubs and watch the dancing from the balconies and would adapt what they liked with their own flavor of style. And with the rise in popularity of R&B music and with such great bands as The Tams, The Embers, The Beach Boys, General Johnson, The Drifters, and so many others, the shag took off! Who couldn’t resist such songs as “I Love Beach Music”, “Be Young, Be Foolish, Be Happy”, or even “Under the Boardwalk”?

The dance, though it can be technical in nature, is a dance that ANYONE can learn! It’s a smooth, easy going dance that is a distant “cousin” of the swing genre. It still contains the basic timing of swing, however, the dance looks and feels vastly different…with a more evenly paced triple step and a more forward and backward flow with a push pull action.

If you’re feeling like dancing the next time you’re at the beach, grab a cold one in one hand and a hot date in the other, and get to shaggin’ !!!